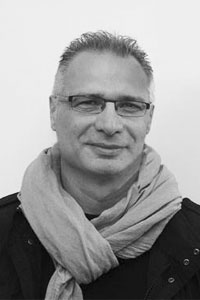 Giuseppe Maurizio Scutellà is born in Alcamo (Sicily), the family moved a year later in Lumezzane (BS) industrial center in the north of Italy (Lombardia), where he completed his education and graduated in 1981 as an industrial expert mechanic.
For 12 years held the position of die-casting and plastic molds Senior Project tech designer, cooperating with high-tech reality, making equipment and molds for Kawasaki, Ducati, Bonfiglioli, Sylber, Metalwork, Gaggia, Mercedes, Fini, Prism, Tronconi, Artemide . At the same time he begins its cooperation as designer with such prestigious reality of the territory: Research and Development for 14 years in Mepra S.p.A.; starting from 2009 to 2013 he worked as a Senior Designer with Marci & Co (Design division of 'Elettroplastica SpA), Pandora Design as a designer of stainless steel and high tech plastic home tools and with United Pets. He has cooperated with Light-Contract (Contract division of the Flos SpA) with whom he released three lamps for HABITAT and MARKS & SPENCER. He cooperate since 2008 with ARTEMIDE SpA, for whom he designed "Pirce" suspension / wall / ceiling (New of 2012) (Cover New Product 2008), winner Good_design 2008 Red Dot Award 2009 (IFF Design Award 2010) and the stand "Alcatraz" in 2011.